Posted on December 4, 2010 by AssabetRiverRailTrail

Some communities embrace rail trails more than others. I’ve always felt that 3 in particular were above and beyond the rest. My criteria is simple, a Massachusetts city or town that has 3 or more distinct rail trails and community paths, all coming together at a single interesting location.

My first Big-3 town is Northampton. They built their first trail in 1984, the Northampton-Ryan trail. The second trail is the 1993 Norwottuck, that starts in Northampton, crosses the Connecticut River into Hadley, passes just south of downtown Amherst and finishes 3 miles east of town. The 3rd is technically a trail in Easthampton, the Manhan that was opened in 2003. But a major extension was built in 2009, connecting the Manhan to Northampton. 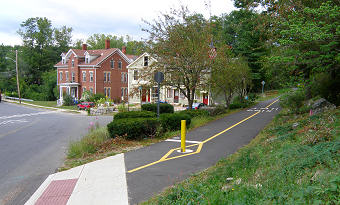 Each of these 3 trails has recently had significant enhancements. The Northampton-Ryan was extended 1.5 miles to the village of Leeds in 2009 and the town purchased some of the ROW in Williamsburg in 2010, to eventually extend the trail into that town. That’s right, one town is buying land in another town, to extend a trail. Now that’s enthusiasm!

The Norwottuck was extended across Rt-5 in 2007 and ends just east of an active RR line. Plans are underway to cross the tracks to the Northampton-Ryan on the other side. 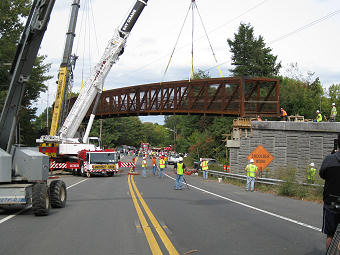 The Manham trail is expanding in 2 directions. Except for one bridge, the connection to Northampton was built in 2009-2010. The western Manhan extension to Southampton was started in 2010 and should be finished in 2011. It’s biggest feature is a long bridge across Rt-10, which was opened on 11/3/2010. 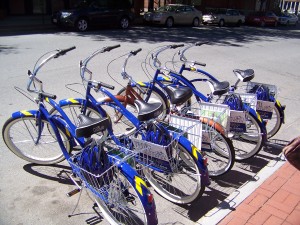 A key player in all this activity is a friend, Craig Della Penna. I recently visited him at his new business, Pedal-to-Properties in downtown Northampton. A long time real estate agent, he opened his own real estate office last spring. It is built on a novel concept, that a good way for prospective house hunters to look at new listings is to bicycle to it! The concept was started in Boulder Colorado and Craig’s business is the 3rd in the country. With Northampton’s network of bike paths, it’s possible to comfortably bicycle to 90% of the town’s residences.

Tom Kelleher is the president of the Assabet River Rail Trail 501(3)(c) non-profit and a 25-year resident of Acton MA.
View all posts by AssabetRiverRailTrail →
This entry was posted in Northampton Mass, Rail Trails. Bookmark the permalink.

1 Response to The Big-3: Northampton